A line of Spirit Airlines planes sit on the tarmac at Orlando International Airport in May. Spirit postponed a shareholder vote on its takeover bids after a flurry of counter-proposals from Frontier Airlines and JetBlue Airways. (AP Photo/Chris O’Meara, File) 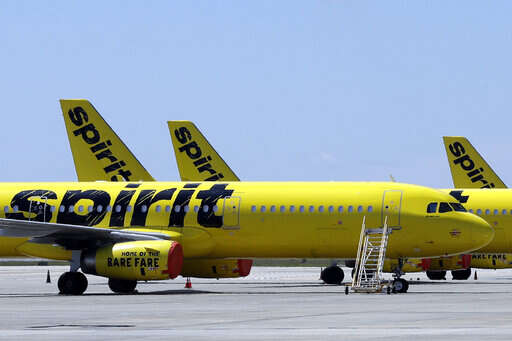 Frontier and JetBlue raise their stakes

Spirit Airlines, the target of a low-cost airline bidding war, on Friday postponed a shareholder vote on whether to accept one of those takeover offers after a flurry of counter-proposals from Frontier Airlines and JetBlue Airways.

Spirit said Wednesday it had postponed the vote on its preferred bid, from Frontier, until June 30, giving its board another three weeks to speak with Frontier, JetBlue and its own shareholders.

The decision to postpone the vote comes two days after JetBlue improved its offer. JetBlue said Wednesday it welcomes the delay “as a necessary first step toward meaningful negotiations between the Spirit Board and JetBlue.”

JetBlue offered more cash than Colorado-based Frontier’s stock and cash offer, but Spirit’s board pushed back against JetBlue, saying such a tie-up would be more likely to be shot down by antitrust regulators federal.

The bidding war for Miramar, Fla.-based Spirit has escalated in recent days as JetBlue tries to allay fears the United States is blocking its acquisition.

The New York airline on Monday Free a reverse severance fee of $350 million payable to Spirit if an agreement between the two is not reached for antitrust reasons, exceeding its previous contingency plan of $150 million.

Last month, JetBlue became hostile in its bid to buy Spirit, presenting its offer directly to airline shareholders. Spirit CEO Ted Christie said JetBlue was more interested in break an agreement with Frontier than with Spirit.

JetBlue and Frontier say expanding by acquiring Spirit would help them compete with the country’s four dominant airlines: American, Delta, United and Southwest.

Donald Keene’s Japan (Pt. 11): Saying goodbye to Mount Fuji after a brief stay in the country

Harrogate not bidding for Eurovision