A UK taxpayer-funded vaccine manufacturing facility has today been taken over by a US pharmaceutical giant.

the The Vaccine Manufacturing and Innovation Centre, in Oxford, was built in 2018 with the aim of developing vaccines to protect against future pandemics, vaccine shortages and price wars.

But New Jersey-based Catalent bought the 74,000 square meter facility for an undisclosed sum.

The site, put up for sale last year, was not owned by the government – although ministers gave it £215million in funding. It’s unclear whether No10 will receive cashback or be able to secure cheap manufacturing deals with Catalent in the future.

The company will invest £120million to complete construction of the facility and equip it with “state-of-the-art capabilities” to develop and manufacture vaccines and treatments.

But MPs called the sale a ‘ridiculously short-sighted move’ which could leave the UK ‘less prepared for the next pandemic’.

The vaccine manufacturing center had received around £215m of government funding in March and is expected to produce 70m doses in as little as four months once operational. 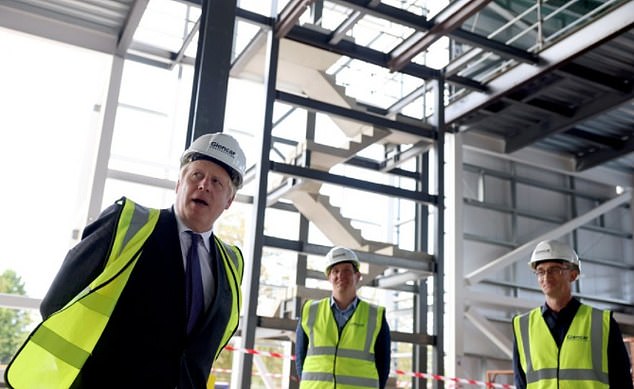 Prime Minister Boris Johnson visited the site in September 2020, when the UK was on the cusp of a second wave of Covid infections, to speak to the builders of the plant and the scientists who had to work there.

The Department for Business, Energy and Industrial Strategy (BEIS) announced in 2018 that VMIC would be the first dedicated site for the manufacture of jabs in the UK.

Its purpose would be to guarantee the availability of vaccines and to ensure that the nation was prepared in the face of a pandemic.

Ministers initially pledged to invest £66m in the centre, which was tasked with working to develop vaccines for Ebola and Lassa fever before the Covid pandemic took off.

But it had received £215million in funding in March, and its construction was accelerated to help in the fight against Covid.

The center, which is not yet fully operational, was expected to produce 70 million vaccines over four months – nearly 600,000 doses a day – after its completion.

WHAT IS THE VACCINE MANUFACTURING AND INNOVATION CENTER?

The Vaccine Manufacturing and Innovation Center was touted as a manufacturing site to “lead the fight against killer diseases” when it was first announced in 2018.

US pharma giant Catalent is rumored to be in talks to buy the site, which was founded by top UK universities and received £215m of taxpayers’ money.

Ministers initially pledged to invest £66m in the centre, which was tasked with working to develop vaccines for Ebola and Lassa fever before the Covid pandemic took off.

But its construction has been accelerated to help in the fight against Covid.

But rather than rely on VMIC to develop bites, the UK purchased 114 million doses of Covid vaccines in December.

And health chiefs this week insisted the UK has a sufficient supply of vaccines for the booster deployments planned for the spring and autumn of 2022.

In its annual financial accounts, the VIMC revealed that the government’s need for additional manufacturing capacity had diminished, while the cost of completing the center “had increased beyond what was envisaged”.

But rather than rely on VMIC to develop bites, the UK purchased 114 million doses of Covid vaccines in December.

And health chiefs have insisted the UK has a sufficient supply of vaccines for the booster deployments planned for the spring and autumn of 2022.

In its annual financial accounts, the VMIC revealed that the government’s need for additional manufacturing capacity had diminished, while the cost of completing the center “has risen beyond what was envisaged”.

The establishment was founded by the University of Oxford, the London School of Hygiene and Tropical Medicine and Imperial College London.

It has received funding from pharmaceutical giants Johnson and Johnson, Merck and Cytiva.

In a statement posted today on its website, Catalent confirmed that it has acquired VMIC.

He said he would complete construction of the site and “equip it with state-of-the-art capabilities for the development and manufacturing of biological therapies and vaccines, including mRNA, proteins and other advanced modalities.”

The company plans to employ more than 400 people and “support public and private organizations seeking to develop and manufacture biotherapeutic products.”

It works with other pharmaceutical companies to produce infectious disease vaccines, including Covid vaccines from Moderna and Johnson & Johnson.

Mike Riley, President of Catalent Biotherapeutics, said the purchase of VMIC enables Catalent to “collaborate with the rich academic and biomedical science community centered around Oxford, with its world-class talent.”

The facility “offers opportunities to turn innovation into real treatments for patients in the UK, Europe and beyond,” he said.

Mr Riley said the site will be operational later this year and will then be integrated into Catalent’s “existing network of biological facilities across Europe to offer a flexible range of manufacturing, technology and development for the pipeline of thousands of development programs”. currently in progress.

Professor Robin Shattock, chair of VMIC and head of mucosal infection and immunity at Imperial College London, said the deal ensures the facility “will stay true to the original aim of strengthening UK manufacturing capacity”.

But the move angered MPs and campaigners.

She said: “Vaccines can take decades to develop and the sale of this facility shows the lack of long-term planning by this Conservative government.

“This facility was purpose-built with over £200m of taxpayers’ money to produce vaccines.

“With this government wasting exorbitant sums of public money and reversing money spent fraudulently, the Conservatives need to come clean about how much this facility has been sold for. 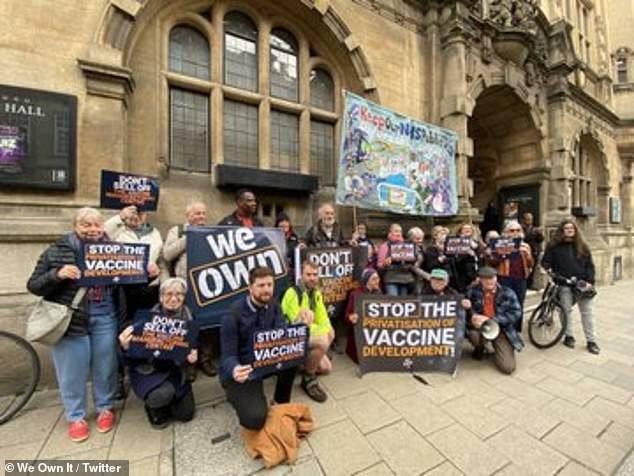 The We Own It campaign group today claimed the deal would see vaccines ‘continue to go to the highest bidders, to bring in the most money possible for Catalent shareholders’. Pictured: We Own It protesting outside Oxford Town Hall last month against plans to sell the facility

“The Prime Minister himself stressed how important this center would be to protect against Covid and future pandemics. The public has a right to know why he has now changed his mind.

And Tom Morton, leader of We Own It, an anti-privatization campaign group, said today: ‘The idea behind this center was to make sure new vaccines were made whether it was profitable or not. to manufacture them.

“It was supposed to support profitable development by removing competition.

“Selling the center to a for-profit pharmaceutical company goes completely against the original vision.

“We have seen that private patents have caused massive global inequality in terms of access to vaccines and this sale simply means that vaccines will continue to go to the highest bidders, to bring in the most money possible for Catalent shareholders. “

A government spokesperson said VMIC is a private company and did not sell the facility.

They added: “Catalent is a highly regarded global organization with an excellent track record, and its expansion into the UK will further strengthen our biotherapeutics industry.

“This investment from Catalent is necessary to keep the facility open for the long term.

“It also represents a strong vote of confidence in the UK as a destination for life sciences, particularly following our response to the global Covid vaccine challenge, and Catalent’s ambitious plans for this facility will build on this job.”

The sale of the facility has sparked furor since it was first reported late last year.

In a letter published in the British Medical Journal, the scientists compared the move to “funding firefighters after a major fire has been extinguished”.

They said the center was needed to protect against future pandemics by supporting vaccine research, development and manufacturing.

Selling the center makes little strategic, public health or economic sense and will damage the UK’s reputation, say the authors.

Company pledged to get signatures to license medical marijuana in Ridgeland